I have an old HP 1018 USB printer at home. It has been serving well for 10 years and is still going strong. Back then we had just one computer at home - a desktop computer which was shared by everyone. Now everyone has their own smartphones desktop/laptops but there is only one printer. Time has come for the printer to be available wirelessly on the network. As a temporary solution, I have connected the printer to the desktop and enabled printer sharing so that any device connected to the same home wifi can use the printer. But the desktop has to be always on which is cumbersome and also increases the electricity bill. Following are the approaches I considered for solving this.

The plan was to connect the printer to the raspberry pi and use CUPS as the print server software to share the printer on the network. It sounds simple and it is indeed simple if you are working with a not too old printer. Sharing the printer with windows devices did require some extra configuration using Samba. Read on to find out the detailed procedure.

Select Add Printer in the CUPS administration portal. If the printer is already connected to USB port of the pi, it should be listed in the local connections. 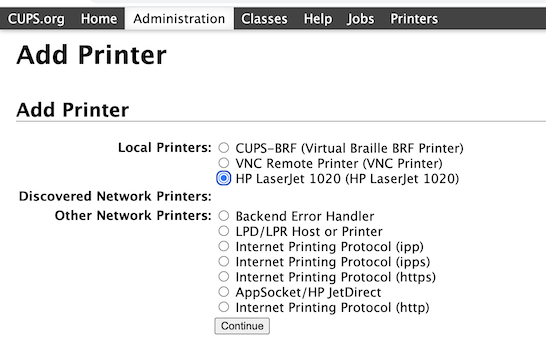 Continue through the CUPS add printer wizard and finish the wizard. A modern printer should now be available on the network.

Mac/IOS/Android devices should automatically detect the printer. But windows systems needs a bit more configuration on the pi. 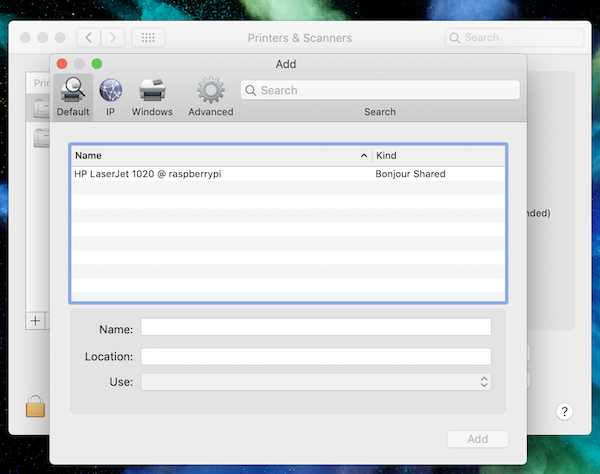 Install and configure Samba to share the printer with windows devices

On Windows devices, you should see raspberry pi in the network sharing center. 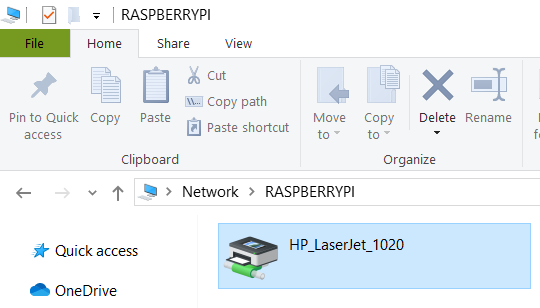 Test your printer and if it is working, you can ignore the below section.

But my printer won’t print..

My ancient printer is now available on the network, all the devices detect the printer and when I try printing, CUPS indeed sends the document to the printer and the job completes but the printer doesn’t print anything. It just makes a clicking sound sometimes making it seem like it is trying hard but it’s not able to print.

The issue with my printer was the HP driver is not compatible with the pi. Fortunately the printer uses ZjStream wire protocol There is a free driver named foo2zjs that was developed for Minolta magicolor 2300 DL printer which is also a ZjStream based printer and so the driver will work with HP 1018. See foo2js home page for more information.

If you don’t see your firmware file (sihp1020.dl in my case) in this directory, copy it manually from the current folder. This is the same file you that you have downloaded in the previous step using ./getweb 1020 command.

Whenever the printer is turned on, hotplug will download this firmware to the printer.

Turn the printer on and off. Delete and add the printer again in CUPS. This time you should the printer’s orange light blink indicating the firmware load. Check /var/log/messages for further debugging if required.